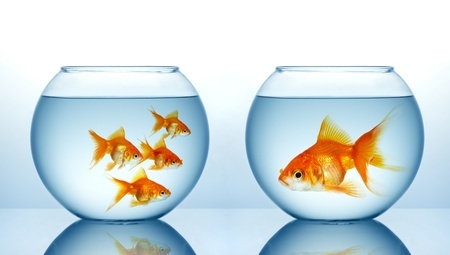 When Lee Dugatkin, Professor of Biology at the University of Louisville, placed guppies in a tank from which they could view predators in another tank, some of the fish swam up to the barricade to observe the predators; he named these “Bold” fish. Others – the “Timid” fish – swam the other direction.

So, asked Psychologist Elaine Aron, why weren’t they called the Dumb Fish and the Smart Fish? What a great question. Possibly the answer lies in the fact that boldness is a much-admired trait in our society. Research shows that those step-forward, take charge, bold types of employees are much likelier to end up in leadership roles. As you go up the managerial hierarchy in corporate America, the ranks of the outgoing and bold swell as the quieter, more thoughtful and more risk-averse counterparts are left behind. Is this leaving corporate America at risk for hasty, poor decisions? I think so. In fact, I coached a client a few years ago who was in the last stages of collapse from stress, stress resulting from her repeated attempts to alert her manager to the need to do contingency planning for some of the crises a large corporation such as theirs might experience. He, in the meantime, scorned her contributions and gave her a bad performance review based on the fact that she didn’t participate easily in the games with which he warmed up for a meeting. Her health became so poor she went on leave, ultimately left the company to go into business for herself, and watched from afar as one of those very crises enveloped her former employer. Being watchful isn’t necessarily a sign of high intelligence, but it is often a trait associated with introversion.
Susan Cain’s book, Quiet: the Power of Introversion In A World That Can’t Stop Talking, has a chapter titled, “Why Did Wall Street Crash And Warren Buffet Prosper?” in which she says:
“Warren Buffet, the legendary investor and one of the wealthiest men in the world, has used exactly the attributes we’ve explored in this chapter — intellectual persistence, prudent thinking, and the ability to see and act on warning signs — to make billions of dollars for himself and the shareholders in his company, Berkshire Hathaway. Buffett is known for thinking carefully when those around him lose their heads. ‘Success in investing doesn’t correlate with IQ,’ he has said. ‘Once you have ordinary intelligence, what you need is the temperament to control the urges that get other people into trouble in investing.’”
And that is the temperament of the introvert: watchful, careful, actually checking to see if there is a trampoline at the bottom of that cliff others are so determined to jump over.

Lynette Crane is a Minneapolis-based acclaimed national speaker, author, and executive coach with more than 30 years of experience in speaking and training. Author of The Confident Introvert,  and a life-long successful introvert, she believes that America is overlooking and even discouraging its intellectual treasure: the 51% of the population who are introverts, and who are highly representative of the gifted. In addition to helping quiet people thrive in a culture that idealizes extroversion, she gives leaders the tools to manage diverse groups in the same setting, and to develop the talent that is quietly under their noses. Visit her website at http://wordpress-476313-1496493.cloudwaysapps.com to see more in-depth articles and to view her programs.