Make It Easy On Yourself 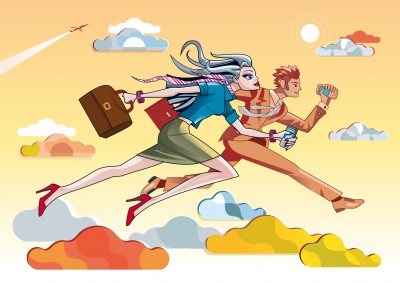 Make it easy on yourself:

Have you ever been caught in a race that never ends:  one in which the big prize at the end is as far out of reach as it is when you started, and the small rewards along the way that might sustain you  have gotten to be scarcer and scarcer?  Perhaps the big prize no longer seems enticing, or even appropriate, but you’ve been so busy you haven’t even noticed its allure fading.

Everybody experiences this at some time.  Why do we keep chugging along, like an overloaded train when the steam has dissipated. Our heads are filled with fine phrases, such as “Persistence pays off” or “Success comes the day after you give up” or the short but harsh, “No excuses.”  The implication is that someone who doesn’t heed these warnings somehow doesn’t have the right stuff to  — well, to do what?

I think these experiences occur  because we have confused a goal with the various paths to that goal, some of which become dead-ends.

I faced this when, as a dancer, I realized I couldn’t (and didn’t want to) live my entire life engaged in strenuous and increasingly painful physical activity that wasn’t bringing me the quality of life I desired.  The intrinsic reward, the joy of dancing, was diminishing year by year, but the home, warm relationship, leisure, and other creative activities I wanted seemed to be getting farther and farther away.

Yes, there was grieving when I quit.  But I also found that the time and energy I had put into dancing became enough time and energy for so many delightful activities I had delayed: first,  ballroom dancing, then ice skating, travel and  language study, music, and eventually, writing and public speaking.  To my surprise, my initial goal, to use my delight and passion to move other people through my performance never went away.  I had just found different roads to get there.

A student of mine once was devastated because her grades had dropped so far she believed she would never get into law school.  We explored why that was so devastating; what would happen if she didn’t get into law school?  She broke down and wept, “Then I can never be happy.”

I had to persuade her that getting a law degree wasn’t a goal; there are many reasons why people want a law degree, including (but not limited to) a desire for a high income, prestige, a stepping stone into politics, or the need to seek justice for the weaker members of society. These are goals; the law degree was the path she had selected.

In her case, the desire to fulfill her parents’ dreams for her had been fueling her ambition – until the fuel ran out. She couldn’t do it anymore. A conversation with her parents led to a switch to a career in lab science, where she happily analyzes data, freed from the need to be bold and assertive.

If you have furnished your dream in too great detail, including the pathway to the door of that dream, you may have locked yourself into a rigid pattern that not only isn’t bringing you happiness, but may even be retarding your efforts to realize your dream.

Stop beating yourself up and asking why you can’t seem to stick to the work load.

Don’t be afraid to back off and say, “This isn’t working for me.”  Don’t let anyone convince you that you haven’t the “right stuff” to succeed if you won’t sacrifice your mental and physical well-being in pursuit of that goal.

Take the time to explore what your heart desires. Jettison any activities (and people) who don’t support you in that quest